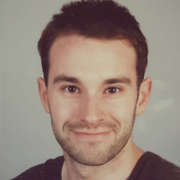 I’m originally from Southport in Merseyside but have been in Oxford for most of my adult life! I first came to Oxford as an undergraduate studying Biochemistry at Oriel College, before moving to St. Cross College to undertake my DPhil.

My DPhil focussed on examining the behaviour of G protein-coupled receptors through resonance energy transfer assays and single-molecule microscopy. Specifically, I aimed to determine whether GPCRs organise into dimers or oligomers, or function as purely monomeric units.

After completing my DPhil I stayed on with my supervisor (Prof. Simon Davis) as a post-doc for two years. In that time I applied for a Sir Henry Wellcome post-doctoral fellowship with the Wellcome Trust, which I was awarded for my proposed research investigating the integration of GPCR and T cell receptor signalling in the immunological synapse.  In April 2016 I moved to the lab of Prof. Michael Dustin at the Kennedy Institute of Rheumatology, part of NDORMS, and began my fellowship. I am combining genome engineering with various imaging approaches to examine how GPCRs, particularly chemokine receptors, are incorporated into the organised structures of the immunological synapse.

Even though my DPhil work focussed on GPCRs, I had a lot of exposure to immunology as part of the Human Immunology Unit at the WIMM, and to T cell biology in particular as part of Prof. Davis’s group. As a result I developed a keen interest in immunology and wanted to expand my studies of GPCRs into that context, which I felt was under-investigated considering the importance of the receptors and cells involved. The Sir Henry Wellcome fellowship was ideally suited to my goals as it allowed me to pursue semi-independent research on a question that I found fascinating but that no-one else was investigating. While preparing my fellowship proposal I received useful feedback on my proposed work and advice on the application process from my current and future group heads and from other recent recipients of the fellowship.

Even though I’ve followed the fairly typical academic route, don’t feel that a DPhil limits you to a career in academia, research, or even science. I’ve known people who have gone on to a diverse range of professions after their DPhil, and in many cases they didn’t settle on their final choice until nearly the end of their degree. Nonetheless, things that will help you if you pursue an academic career will also help you if you chose another path so always take those opportunities when you can. Go to conferences and, if possible, present. Put yourself forward for awards – you won’t get them if you don’t go for them. Perhaps most importantly, try to find and build a relationship with your supervisor where they respect your scientific opinion and will allow you to be the driving force behind your work. This will give you much greater ownership over your research when it comes to publication and will also allow you to develop your own abilities in critical thinking and self-organisation.