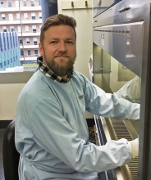 I moved to Oxford to start working in Prof Marella de Bruijn’s lab at the WIMM as a research assistant. I’d been travelling and working in an office for a while after finishing university, so it was time to get myself back into the science world again! I’d always been interested in developmental biology, gene regulation and cancer, so a job in a developmental hematopoiesis lab was perfect for me.

My DPhil focused on the cis-regulation of the hematopoietic master regulator Runx1 in developmental hematopoieis. Runx1 is a transcription factor that is absolutely required for the formation of the first hematopoietic stem and progenitor cells (HSPCs) in the developing embryo. However, the regulatory components of Runx1 that mediate inputs from upstream factors to influence how and where Runx1 is expressed were largely unknown. My DPhil involved characterizing seven new enhancer elements which I found to mediate distinct yet overlapping patterns of Runx1’s overall expression patterns in the embryo. I also performed ChIP-Chip and 3C experiments to a) search the wider Runx1 locus for distal regulatory elements and b) to understand which elements interact with the gene’s two promoters to orchestrate gene expression in different cell types.

After my DPhil, I moved to Australia for my first postdoc in Dr Samir Taoudi’s lab at the Walter and Eliza Hall Institute in Melbourne. During my time in the lab, I continued to work on developmental hematopoiesis, looking for new transcription factors that may mediate the transition of the earliest hematopoietic stem cells to the mature adult form. We developed a novel chimeric embryo technique to knock down/out genes using shRNA or CRISPR/Cas9 in a proportion of the developing embryo whilst the remainder of the embryo remains wild type. This avoids the potential lethality caused by disrupting candidate gene expression. Using this technique, we were lucky to discover a new, undescribed transcription factor whose molecular function is still being characterized. I recently moved from the Taoudi lab to work in Prof. Doug Hilton’s lab, where I’ve been working on a whole-genome CRISPR/Cas9 screen to uncover novel components of the JAK-STAT signalling pathway, just for a change!

My current job really stemmed from the arrival of CRISPR/Cas9 gene editing technology at the institute a couple years ago. I started to apply CRISPR to my work in the Taoudi lab, to get quick and reliable knockout of target genes we were interested in, which proved to be instrumental in discovering the new transcription factor. Then, when it was time to move on from the lab, there was a real market for helping other labs within the division with CRISPR experiments. As such, part of my current job involves designing and making gRNA virus for colleagues. In addition, we have resurrected the M1 leukaemia cell line which Prof. Hilton used to discover the Suppressor of Cytokine Signalling (SOCS) proteins in the 1990s. Through a whole genome CRISPR screen, we have recently discovered a novel regulator of IL-6-mediated JAK-STAT signalling, which we are moving on to study in vivo.

My advice to current DPhil students thinking about their career options would be to research potential labs quite thoroughly, to see if it would be the kind of environment they’d like to work in. For example, I knew that I would never be comfortable in a large lab of 20+ people. I’d also advise taking a risk and moving somewhere new. I never imagined that I’d live in Australia, but, after nearly five years of being here, I can honestly say it was one of the best decisions I ever made, both professionally and personally.